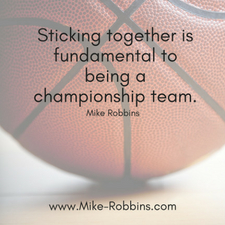 In today’s solo episode, I use the Golden State Warriors as an example of a team that exemplifies a true championship team. As a lifelong fan of the Warriors, born and raised in Oakland, I’ve witnessed plenty of failure from this franchise over the years. The current incarnation of the Golden State Warriors, who just won their third NBA title in the past four seasons, however, is arguably one of the greatest teams in basketball history.

And, not only have they been incredibly successful on the court, they have built a team culture that is remarkable (which I believe is one of the keys to their extraordinary performance).  It doesn’t matter if it’s in business or in sports, when we make a commitment to each other and to the chemistry of the team, incredible things can happen. In this episode, I outline five specific things the Warriors have done to create their success, which I think any team can emulate in order to enhance their culture and performance.

Purchase Bring Your Whole Self to Work and gain access to bonus material.

What can sports teach us about life, teamwork, success, and failure? @mikedrobbins

Positive competition is when we push each other and it brings out the best in us. @mikedrobbins

Sticking together is fundamental to becoming a championship team. @mikedrobbins