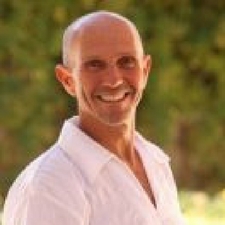 On today’s episode I interview my new friend Tom Kelly.  The first time I met Tom, he blew my mind. He is so full of life and love. My friend Robert recommended that we attend a yoga class Tom was leading. He truly brought all of himself to that class – it was extraordinary.  After class, when Tom and I first spoke, there was an instant connection.

He is a one-of-a-kind guy with a one-of-a-kind story. In this conversation, Tom shares details and insights from his 25-years as a monk in the Self-Realization Fellowship, how he came to his decision to leave the ashram back in 1999, and how he lives and breathes love, every day of his life.  He also talks about starting his own yoga studio, The Soul of Yoga, and his new venture, Love Force Revolution, Inc.

[7:22] Tom began the connection to the deepest part of himself through yoga.

[9:55] When Tom added yoga to his life for the better, his friends were the first things to fall away.

[14:10] The decision to become a monk was easier said than done, but love kept him involved for 25 years.

[21:56] Writing down his fears along with their positive aspect, led Tom to leave the  Self-Realization Fellowship.

[24:38] Tom had a spiritual friendship with his future wife at the ashram, before getting married outside the hermitage.

[35:38] Source brings unity. Source allows a person to be in their calm center, in their authenticity, and to bring their whole self to work.

[45:40] How Love Force Revolution helps us to integrate source into our practical world.

“You are who your essence is.” @loveForceRevo

“Step out of the box and into your true nature. That’s where the revolution is.” @loveForceRevo

“If you only had an hour left on earth how would you live?” @loveForceRevo