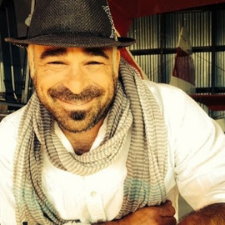 My friend Eric Saperston is an award-winning filmmaker, best-selling author, international speaker and the Chief Creative Officer of an organization called Live In Wonder.  He’s an amazing human being and joins me on the show today to discuss what he has learned from over 25 years studying the behaviors of extraordinary people. Eric met, hung out with, and interviewed actors, musicians, artists, and business executives while creating his documentary The Journey. He talks about the common thread he found in icons such as Jimmy Carter, Jerry Garcia, and Billy Crystal. Eric then discusses what is next for him and his team, and what we can expect from the new series Three Things: Wisdom From Strangers.

[7:39] Extraordinary people know how to pivot. They aren’t afraid to change, learn, and grow in new directions.

[9:33] Eric discusses how The Journey came to be. After he graduated college he sought a time to press pause and enjoy life before entering the workforce and didn’t want to get a corporate job or graduate degree like most of his friends. One of his mentors suggested he find a way to provide value to both himself and others, and that and that suggestion changed the trajectory of his life. He looked at his skills and gifts and set his purpose to having conversations that led to bridge the gap between youth and elders. The three things he examined were:

[17:02] One year turned into four with three other travelers and over 200 interviews. This lead to a development deal with Walt Disney Studios, and a win at SXSW. The Journey premiered in 2001 in theatres worldwide.

[21:23] The Journey was at the cutting edge of the digital movement, and his interview form is much like the podcast interviews we see modeled today.

[23:46] When you go down a path no one else has gone before, it’s hard to measure success. Eric and his team dealt with outside doubt and skepticism. Many couldn’t see what the end result would be, but he stayed true to his purpose and service.

[36:57] Eric had an epiphany one night in Costa Rica and realized the commonality of all the extraordinary people he spoke with: they lived their life with wonder. Instead of getting boxed in and living life too seriously, they stayed in a childlike state of play and exploration. This led to gratitude and fun, which made them magnetic and captivating to others. They also were exceptional question askers, lived with curiosity, and listened to what people had to say.

[47:31] Their new series Three Things: Wisdom From Strangers captures answers from people contained from all walks of life.

“As long as people think you’re little crazy, it gives you a wide range of behavior to take advantage of.” — @EricSaperston

“Wonder isn’t something that needs to be taught, it’s innately in every human being on this planet.” — @EricSaperston

“There’s no way to create something in this world if you aren’t willing to play and try something new.” — @EricSaperston